As part of the Patternity effort, I spent some time creating a simple Java API to generate UML diagrams programmatically from Java, in SVG format.

This small API called for now Patternity Graphic is working and available here: patternitygraphic_src as a source Zip (alpha release of course).

It can render small class diagrams with hierarchic, flow and radial layouts, and arbitrary sequence diagrams with unlimited nesting of method calls and embedded comments. My focus was to support the subset of diagram elements and capabilities required to display patterns occurrences.

Here is a sample sequence diagram with a nice call stack: 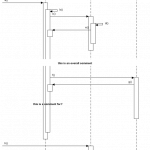 And here is a class diagram for a simple dummy hierarchy: 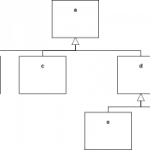 Boxes and links have various styles, defined in a template.svg template file, here is a random display of the boxes styles: 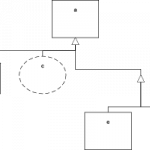 Apart from unit tests there is no documentation. If you are interested to reuse that please contact me for help. The Zip was exported in Eclipse with the project Export… function, and the project requires Commons Collections. Svg diagrams can be converted into images using Batik.

I have experimented an approach that considers every design pattern as the recursive composition of smaller patterns. This led to a prototype tool to illustrate its benefits by generating design-level documentation of annotated source code.

Eat your own dog food

The source code of this tool itself was used as the code base to apply the tool on, in order to generate its own design documentation. The Java Doclet API was used to retrieve the Javadoc tags in the class Javadoc comments, e.g. :

A subset of design patterns and some other patterns such as the Knowledge Level (Fowler) has been defined in small definitions files then loaded at tool startup. We call this set of patterns definitions the pattern catalogue.

Here is an example of the definition file for the Builder pattern, notice the declaration of the member roles at the bottom, that also declares the expected pattern kind:

Parsing the annotations to build the pattern occurrences graph

Whenever such pattern uses a Type Hierarchy (this is declared in the definition of the pattern), then the tool will look for every subtype of the declared (super) type in order to complete the pattern occurrence as well as possible.

Even patterns that are usually considered as atomic patterns can be explained as the composition of smaller “elemental” patterns. For instance, A Builder [GoF] usually defines an AbstractBuilder role and a ConcreteBuilder role that implements it. We can express this part of the Builder pattern as a TypeHierarchy elemental pattern in the role Builder; the supertype of the TypeHierarchy therefore represents the AbstractBuilder role, while every other concrete type of this hierarchy represents ConcreteBuilder roles.

By analogy with the members of a class, we call members patterns and member occurrences the patterns and occurrences (respectively) a pattern or occurrence is composed of. The tool totally ignore fields and methods, it only considers types (interfaces and classes).

The benefits of this approach are to reuse a bigger part of the pattern definitions through composition and to help address the variant problem.

Once the pattern occurrences graph is completely built, it is rendered into an UML class diagram using Graphviz dot. Here is an example of overview for the full project:

In the above diagram we can see how the patterns naturally sit on top of the several type hierarchies while connecting them together. Also the relationships between patterns become very obvious, such as the Interpreter that references the Builder and the Composite sub-patterns. This suggests that such diagrams are very valuable to document the design of a code base.

As an alternative to visual diagrams, a tool can also generate natural language text to communicate the exact same information. I have tried this approach using simple text templates in each pattern definitions. Each pattern therefore defines its own design description, but using variable names to be filled later with the data from the pattern occurrences graph.

The biggest work in this approach is to deal with the plural, the enumeration of collections (comma between each item but the last etc.), truncating collections that are too long, and the complete omission of a section if a pattern member is totally missing.

Here is a sample of text generation for the prototype tool itself. Notice how the structure is rigid for each pattern occurrence: Pattern name, short description, then template text evaluated with the actual types names, followed by the comment that was put after the @pattern declaration:

Later, at work, when asked to produce a design documentation targeted at other developers, I have experimented doing a similar effort manually, using nothing but patterns. I am still impatient to receive some feedback from the people that will read the resulting documentation in order to validate or infirm this approach.

It’s a complete mistake to think design patterns could be written in a library for later reuse, it just does not work !

In theory, first, design patterns are expected to be tailored to each particular situation. What you reuse is the abstract solution, not the code itself.

And it is true, whatever the design pattern you may consider, it is just not possible to implement it once and then reuse the code.

When I first thought about this topic I remember I immediatly thought of Observer and Iterator patterns as possible objections since they are both defined as interfaces and classes in the java API itself. Are they counter-examples of what is stated before ?

I don’t think so. I tried to use the Observer/Observables classes built-in in the Java API several times, but every time they were not suited for my needs so I had to define my very own for the needs of my application. This is a good example of how a pattern can be expressed in code, for one particular case, but cannot be really reused accros other cases. The Iterator pattern proves that again, as there is not one but already two interfaces in the Java API for this simple thing. And if you take a look at the commons collections you will find many other variations on this pattern, such as OrderedIterator and ResettableIterator.

So everytime I see a framework trying to freeze patterns in code, which is what a framework does in essence, it becomes obvious that this reduces reusability a lot (to be honest I am now rather defiant about frameworks).

Initially published on Jroller on Thursday May 12, 2005