The players know the rules, still we need an antagonism role, the arbiters, to keep the game fair. It is never perfect, but this is not plain chaos either.

Many mature businesses have chosen a similar structure. There is a role to make money, as much money as possible, and another role to control risk under an acceptable level. 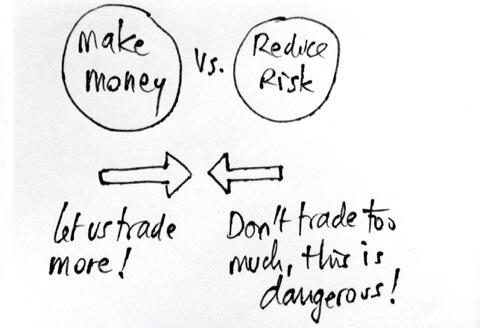 In finance, this schema is visible at several levels. Traders and sales people in the front-office focus on making money, while officers in the risk department closely monitor their activity to control they don’t go too far. We hear very loud in the news when the traders go too far. We don’t hear much when the risk people go too far, but reducing risk usually hurts profitability in the short term.

This schema occurs again between banks, who want to make money, and the regulators, who is supposed to protect the country and the customers. That the regulators do a good job or not is not the point of this article, my point is that there is a common business pattern there.

This dichotomy is not a rule, it is just an heuristics to suggest there may be a need for two distinct Bounded Contexts.

Who is the key decision maker is probably the question that shapes everything. I learnt that a few years ago in a course with @ziobrando. In particular, when two management hierarchies are involved, even if their visions coincides right now, it’s unlikely that both visions will evolve the same way over time. This is a reason to split the solution in two Bounded Contexts that will evolve independently. So if you have a Direction of Trading and the Direction of Risk, you’re in this situation.

Modeling in the two contexts

Software systems for that typically manages the business one deal at a time. They often need to be real-time, or fast enough not to lose impatient customers. Sometimes we may even accept to trade calculation accuracy in exchange for speed. For example we may be using floating point calculations instead of Big Decimals, or an approximation instead of the exact formula.

Software systems to support making money need to help people doing the sales to be fast, for example with rich defaulting of the input values.

By contrast, software for officers who want to reduce or control risk often computes risk metrics out of a lot of deals. It may be fraud analysis or a stress tests simulating markets crisis. It is often just computing the overall risk taken by summing up the numbers from each deal. Some do that in realtime too, but usually it can accommodate much slower paces like on-demand, daily, weekly or even monthly. 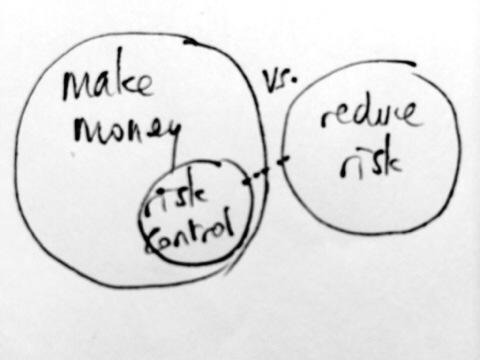 Sometimes the competition is so tight that risk control becomes the key differentiator to make money between competitors. In this situation risk control has become another miniature sub-domain within the domain of selling and pricing. Still, it has its own risk-oriented perspective on the business, and it is like a delegation of responsibility from the risk officers to the front office people and their trading bots. Even in this situation there will also be a full-featured domain of risk control outside, with the corresponding software in its own Bounded Context.

DevOps is the classical example in software development: developers want to release often to deliver more value. However ops people know that each release comes with risks for the production so they traditionally prefer to release less frequently. “No release, no risk” would be ideal for them. 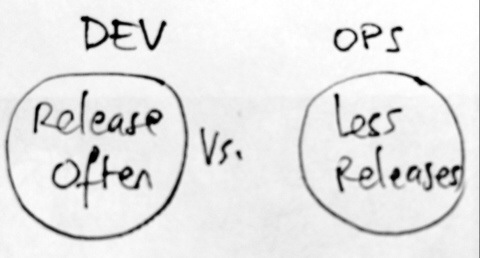 In this scheme, developers and ops teams use different tools, and don’t monitor the same indicators. When they get closer as in DevOps, the ops usually delegate some risk control to the development team and their automated testing tools, but they keep their own expertise and their specific tooling.

Many thanks to @ziobrando and @mathiasverraes for the early feedback and some complements incorporated into the text.